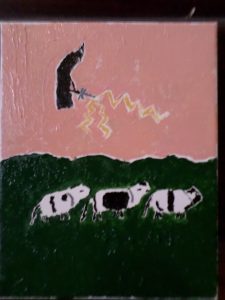 In a somewhat compelling twist of irony, my subscribing to Rolling Stone is a direct result of Soundgarden fandom (I got the mag. deals for ordering a shirt through hottopic.com), and then just today this Pearl Jam Collector’s Edition moved me to tears by its very mention of Chris Cornell, and made me put it down. Anyway, while I could still stand to read, I got yet another account of all the guys in Mother Love Bone, a band I can never seem to keep straight in my mind with regard to its members, and learned that Andy Wood, the virtuosic, attention-grabbing late frontman, had roomed with Cornell in the early ‘90s or late ‘80s, a detailed account of Wood’s personality and persona furnished in the Sep. ’16 Cornell interview.
I am just so far removed from this, I guess, this west-coast world of poignant, anthemic rock, as enrapt as I still become before popping in A-Sides from front to back, or as stalwartly as our own Indiana’s proud Days of the New approximate the founding days of grunge (probably way TOO proudly, to be precise). Everybody knows A-Sides: it was only the most glorious statement of celestial rock glory in greatest hits form of the whole 1990s, pressed out on a coal-black CD, appropriately enough. This collection here is meant as a playlist to accompany that [1], the two then in tandem giving a scope of how deep and vital this band’s catalogue really is. The music is purposeful, dark, dangerous and exciting. And it’s still here, although Chris Cornell is not. That’s just the world, I guess. One things is clear: I sure as he** can’t read about all this madness, to save my soul. Another thing is clear too: the very antidote I need is ipso facto.
..
1 “Beyond the Wheel” (Ultramega Ok)
2 “Mood for Trouble” (Ultramega OK)
3 “I Awake” (Louder than Love)
4 “Full on” (Louder than Love)
5 “Searching with My Good Eye Closed” (Badmotorfinger)
6 “Face Pollution” (Badmotorfinger)
7 “Drawing Flies” (Badmotorfinger)
8 “Mailman” (Superunknown)
9 “Superunknown” (Superunknown)
10 “Kickstand” (Superunknown)
11 “Fresh Tendrils” (Superunknown)
12 “4th of July” (Superunknown)
13 “Half” (Superunknown)
14 “Like Suicide” (Superunknown)
15 “Rhinosaur” (Down on the Upside)
16 “Zero Chance” (Down on the Upside)
17 “Dusty” (Down on the Upside)
18 “Applebite” (Down on the Upside)
19 “An Unkind” (Down on the Upside)
20 “Boot Camp” (Down on the Upside)
..
[1] I’m drawing from the current Spotify version of A-Sides, which includes “Mind Riot” and “My Wave,” unlike the original CD pressing.
..