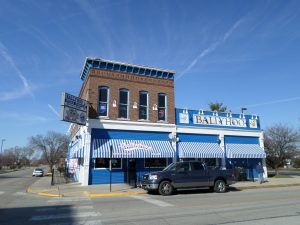 I have this thing buried deep in my mind — it must be from like taking acid or something, but I have this Apollonian affinity for architecture (even including Legos, et. al.) which for some reason I associate with perfect pop music like “Penny Lane.” On a note which is less related than I’m probably letting on, yesterday I frequented this one bar here in Terre Haute, Indiana not once, but twice — once to apply for a job and another time to hang out and pass the time, being possibly more a bum than any other person on this planet ever has. Luckily, there were both college and pro baseball on the TV’s.
And it’s interesting — early on in the night it’s more old timers, so the music is more classic rock and not that crazy chopped and screwed dance stuff that you can shake a stick at. The old timers, and I’m talking 40-somethings, are light and jovial, play pool and broadcast “American Pie” on the jukebox. Now, this is especially an advantageous move, initiating an eight-minute and 33-second song on these new ripoff jukes where you only get one song per dollar (by the way McDonald’s burgers have like barely got more expensive since the beginning of time). Anyway, I have a really hard time describing architectural intricacies (I have a feeling it would involve using words like “abutment” and stuff), so I’ve just attached a picture of this building, which albeit is one I took in winter whereas last night it was obviously late June. [1] Well, just try imagine being in the beautiful building in late June and hearing “American Pie,” a good ol’ Yankee classic which I happened to not have heard in an exorbitantly long time, for some odd reason.
Usually I’m concerned with what part of the country from which artists hail, but I’ve decided to not research Don McLean in this way — I consider him worldly and pervasive, above the finite realm of geographic location. His music is quintessentially American, surreal and vaguely apocalyptic/psychedelic much like Shel Silverstein and the poem “Where the Sidewalk Ends,” which champions children for their innocence through ignorance of the world’s perceived limitations.
Art will always get us thinking outside the world of limitations. Something I’ve noticed about British is that with the onset of rock and roll, they stopped writing novels and poems at quite the clip they were before, but certain bands like Pink Floyd and Jethro Tull made the habit of initiating narratives within songs (“Cross-Eyed Mary”; “Brain Damage”), Led Zeppelin more prone to transposing Tolkien, which of course is related. The American flipside of this, then, you might say, is something similar with “American Pie” — a narrative which although dealing with alleged past events earnestly, never grounds itself in any individual and is not objectives-based but image-based. American culture has always been and will always be dominated by images, from the Statue of Liberty to Mount Rushmore to the Grand Canyon to even the archetypal “American woman” on the silver screen, subject of such British songs as Mungo Jerry’s “In the Summertime” and David Essex’ “Rock on.”
“American Pie” too, similarly, seems to have a woman as its primary topic matter: “Bye bye Miss American Pie” — something that has lost in tandem with the event of “the day the music died.” Issued in 1971, during a time of war for Americans, the song deals undeniably with basic cognitive ideals with art as a prize — the struggle to formulate, upon everyday life, a value system which is feasible and also at the same time preserving of any nurturing human or quasi-human elements, thereby able to grant a certain point of pride in the individual.
One line stuck out to me more than any other upon my listening to this song last night: “The church bells all were broken”. Now, the more I think about it, it’s surprising to me that this never came across as a Christian rock song, nor is it largely considered as such, what with the ensuing lines “The three men I admired most / The father son and the holy ghost / They caught the last train for the coast / The day the music died”. Well, as far as I can recall off the top of my head, there are no images of being INSIDE a church, nor are there themes of grappling with an oppressive “God” the way we might get with a Live or a Creed, and the “I met a man who sang the blues” line is very pagan, heathen, nodding to the southern African American and the blues scale (whereas gospel music utilizes the traditional major scale and, at least historically to an extent, shuns the tri-tone, extant in blues music). What’s most likely the case is that everybody who’s ever imbibed this classic tune (I’ve heard McLean’s other stuff is good but haven’t checked it out; this was definitely an ostensible golden age in music) has a different dominant image in mind that for them defines it. For me I have to say it’s what I think is the last full-volume verse before the quiet one: the “And then we were all in one place”, always bestowing me with these intriguing images of metaphysicality, like humanity’s ability to evade the spatial realm of the universe and actually occupy the exact same space that another is. Indeed, I think, that’s exactly what great music should do. Maybe that’s why it always stood out for me.
.
[1] I got a funny feeling looking at this wintery vista while lodged in the summer months: somehow it keenly came over me the mindset behind war, which I think has something to do with the perceived pressing need to win a carnal victory which the overall environmental proceedings may not necessary call for as important.

24 thoughts on ““The Church Bells All Were Broken: Giving ‘American Pie’ a Good ol’ Half-A**ed American Listen in Summer 2017””